Home > Mosquito Control > All About Mosquitoes

Mosquitos are thought to have inhabited the world for over 170 million years. They serve as major food source for fish, birds and other insects. There are over 3,500 species of mosquitoes in the world, of which 175 are found in the United States. It is believed that Alexander the Great was killed from a disease caused by a mosquito bite and he is not alone. According to the World Health Organization, mosquito bites result in the deaths of over one million people each year. The majority of these deaths are caused by malaria, a mosquito borne disease. The more we understand mosquitoes, the better we can become at mosquito control. 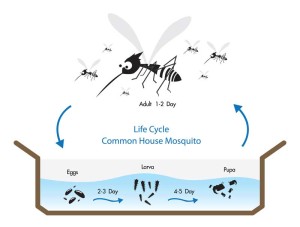 Female mosquitoes have an average life span of two months and males live less than 10 days. The female mosquito can lay up to 300 eggs at a time and require standing water to do so. The eggs are dropped in bunches on the surface of water, called mosquito rafts, and only an inch of water is necessary for this breeding. The eggs hatch into larva within 10 days. The larva requires oxygen to survive and can even be seen swimming up and down the surface to breath. The larva will feed off algae, plankton, and other microorganisms in the water while it develops. Soon the larva turns into pupae where the metamorphosis of the mosquito is complete over the course of 1-4 days. The pupae emerge from the water as an adult mosquito where it rests to dry out and harden. Pretty crazy right?

Why Do Mosquitoes Bite Some People More Than Others?