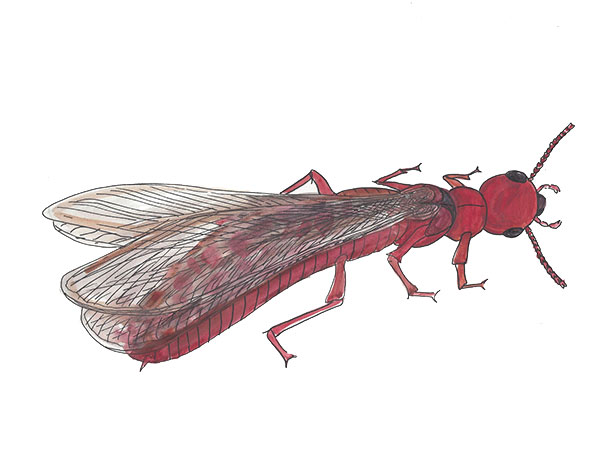 The reproductive dampwood termite is larger than a drywood or subterranean termite and averages 1 inch in length. It has two large wings and its body is dark red to brown.

Workers are creamy white to brownish.

Soldiers have large, reddish-brown heads with large mandibles or pinchers. They average 8.5mm-13 mm in length.

Mature dampwood termites can establish colonies in the thousands. As with other termite species, reproductives take flight during the mating season. Swarms typically happen for several months each year between January and October. Once the male and female pair up, they break off their wings and create a nest in moist wood. The female will lay her first batch of eggs within two weeks of mating.

Dampwood termites are attracted to light and unlike most termites, they are relatively good fliers. Keeping outside lights off in the evening hours will help reduce dampwood activity around the home.

If moist wood is inaccessible, liquid treatments may be necessary. Tiny holes can be drilled followed by injections of liquid termiticide.

Signs of a Dampwood Termite Infestation

Mature colonies produce winged reproductive termites. Wings and bodies will form around windowsills and doorways. Swarms typically happen in Florida each year between January and October.

Dampwood termites do not regularly infest residential homes but do cause extensive damage if they do. If given the chance, wood damage can be extensive after several years of an infestation.

Do you have termites in home? Call us for a free termite consultation. It is often very difficult to detect termites and they can be deceiving. Call on our experts to take care of your termite problems.

If you have any questions about termite treatment, termite damage or termite fumigation, please call us for a free termite consultation.