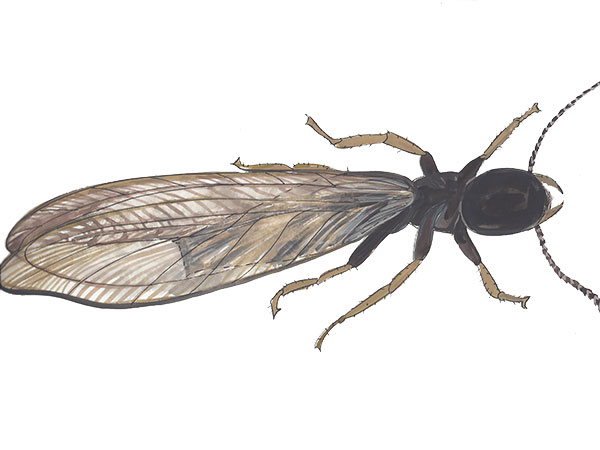 The reproductive subterranean termite swarms during late Winter/early Spring and usually after rain. They have 4 long grayish transparent wings with a thick black vein along the front end of the wing. Their body is black and they are roughly 1 cm in length.

The worker subterranean termite has a creamy white body averaging 3 mm in length. Their head is round and their antennae are straight.

The soldiers have long rectangular heads with long black mandibles or pinchers. Their head is dark orange and the rest of their body is light yellow to white. The soldier termite can range in length between 8-12 mm long.

Subterranean termites live in colonies underground and will travel up to the length of a football field in search of food. Workers forage for food 24/7 and build mud tunnels that connect the colony to above ground food sources. Once they discover a new food source, they mark it with a pheromone chemical used to communicate with each other. Subterranean termites will eat wood, paper, cotton, plants and even living trees. They obtain their nutrition from cellulose, the main structural component of plant cells.

A mature colony can range from 15,000 to as many as 5 million workers. The primary queen can lay as many as 10,000 eggs per year. A newly hatched subterranean termite can develop into a variety of castes: worker, soldier or reproductive. The workers make up the bulk of the colony and cause the majority of damage to wood. Subterranean workers forage for food, water, care for the young, build shelter tubes and groom the other termites. The soldiers sole responsibility is to defend the colony and they make up only 1-2% of the termite population. Reproductives have the potential to be king or queen of a new colony. They grow wings and swarm out of the colony each Spring, usually in the morning after rainfall.

Preventing wood from making contact with the earth is paramount with subterranean termite prevention. Make sure lumber and firewood are stowed off the ground or inside storage containers.

Before making additions or structural changes to a home, have a termite technician perform a pre-construction treatment to the soil.

Subterranean baiting stations are another effective treatment and leave a much greener footprint. Plastic stations containing laced bait are installed in the ground every 10 feet around the perimeter of a home. Subterranean termites are attracted to the stations and carry a lethal dose of bait back to the nest, providing total colony elimination. The baiting system is perpetual and can be used as a preventative measure or to eradicate subterranean termites.

Signs of a Subterranean Termite Infestation

Damaged wood caused by subterranean termites will be coated with an earthy mud like substance and may appear as if chewed by an animal.

Because subterranean termites live in the earth, homeowners do not usually spot signs of an infestation until the annual flight of the reproductives. Swarms usually happen in Florida each year during early Spring and after rainfall. During a swarm, subterranean termite wings and bodies will develop around windowsills and doors.

Subterranean termites build mud tubes when infesting a residential home. These mud tubes protect the termites as they forage out of the earth looking for new food sources.