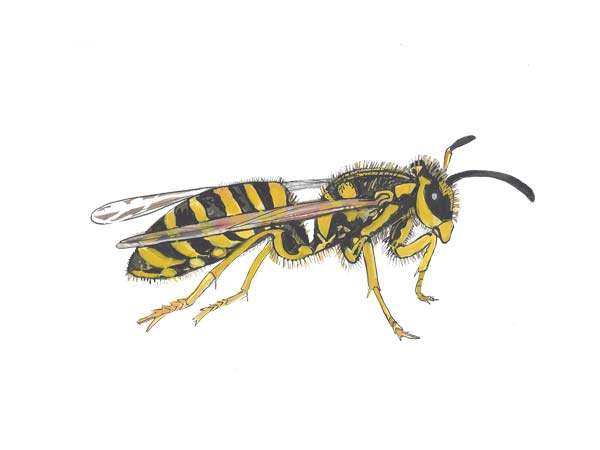 Yellow jackets are commonly mistaken for bees because both are similar in color and size. Yellow jackets are around 10-12mm in length. Their color alternates between black and yellow bands around their abdomen and thorax. Their faces also alternate between yellow and black.

Yellow jackets can create either an aerial nest or conceal them under the earth. When introduced into urban settings, yellow jackets create nests in voids of walls, ceiling corners and under roof eaves. The yellow jacket nest usually lasts about one season before they begin to die off. In the beginning the queen builds the nest, which averages the size of an orange.

Yellow jackets are social creatures living in highly organized colonies made up of queens, workers and drones. Each Spring fertilized queens emerge from hidden areas to build nests and lay eggs. As the eggs hatch, new offspring emerge with specific duties such as tending to young, searching for food or defending the nest. Colonies started in the Spring by a single female average between 1,500-15,000 individuals.

Yellow jackets play an important role in destroying insects that attack crops and agriculture. They eat crop destroying pests and act as pollinators for plants. Yellow jackets should only be eradicated if they pose a threat to humans. Yellow jacket nests are complex and are sometimes hidden under the earth. The first step for yellow jacket control is a detailed inspection from a licensed pest control technician. Only once the nest is located and the species is identified can treatment begin. Treatments vary between insecticides, baits and traps.

Yellow jackets aggressively defend their nest against predators when disturbed. Their defensive behavior increases as the Winter months approach and food sources grows scarcer. Aggressive behavior also increases as the colony grows in size; therefore it is best to address infestations before they become too large. Yellow jackets are notorious for multiple stings when aggravated. Their stingers have no barbs and can be used many times to inflict pain. Reactions to yellow jacket stings can be short lived to life threatening. Typical reactions include swelling, tenderness, itching and intense burning sensations. Multiple stings are the most damaging for the liver and can lead to serious medical conditions or death.